BP’s £200m sale of a major North Sea oil pipeline to petrochemicals company Ineos should face scrutiny by MPs, the Unite union has said, claiming the deal poses a risk to jobs and puts key infrastructure in the hands of one man.

Ineos said it had agreed with BP to buy the Forties Pipeline System, which transports nearly 40% of the oil produced in the North Sea and employs 300 people.

The sale gives its billionaire founder-owner Jim Ratcliffe control of a 100-mile system of pipelines, as well as the Kinneil terminal, which processes oil and gas for Ineos’s vast Grangemouth refinery. 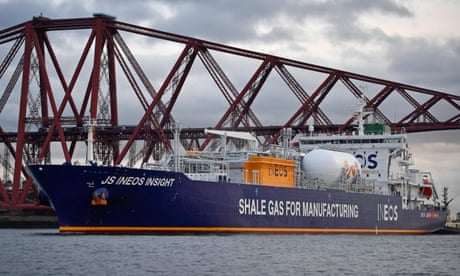 Ratcliffe said the deal would secure jobs in the long term but Unite, which has previously fought acrimonious battles with Ineos, called for MPs in Westminster and Holyrood to look into the deal.

Unite’s Scottish secretary, Pat Rafferty, pointed out that both Grangemouth and the pipeline system had once been owned by a nationalised British Petroleum “with a responsibility to look at what was good for the country as a whole, not just what was good for a small group of wealthy individuals”.

“Both these parts of vital national infrastructure, which are central to the success of the Scottish and wider UK economy, are now essentially in the hands of one man,” he said.

“Unite firmly believes that this sale is bad for Scotland and the UK.”

“We demand that both the Scottish and Westminster parliament carry out inquiries and that every MSP and MP in Scotland has a responsibility to make their position clear.”

“Do they believe this sale is in the national interest?”

Unite added that it had “serious concerns” about the livelihoods, pensions and employment conditions of 300 people employed by BP on the Forties Pipeline System.

The union had previously fought a bitter battle with Ratcliffe, afterIneos threatened to close the huge Grangemouth refinery altogether in 2013 during a bad-tempered cost-cutting dispute.

Ratcliffe said the Forties Pipeline System deal would work out in the best interests of the oil and gas industry and the regional economy.

“We have a strong track record of acquiring non-core assets and improving their efficiency and reliability, securing long term employment and investment,” he said.

“I am delighted that we can now bring this integrated system back under single ownership in Ineos.”

The deal will still need the approval of the independent Oil and Gas Authority, which has to be satisfied that it will not conflict with the aim of extracting as much of the remaining North Sea oil as possible.